Since February 2022, JRS has been working together with the Xavier Network, Concordia Moldova, the Society of Jesus, local civil society, and NGOs to accompany, serve, and advocate for people fleeing Ukraine.

So far, thousands of people have been supported through emergency assistance, housing, education, cash allowances, and psychosocial support. These are some of their stories. 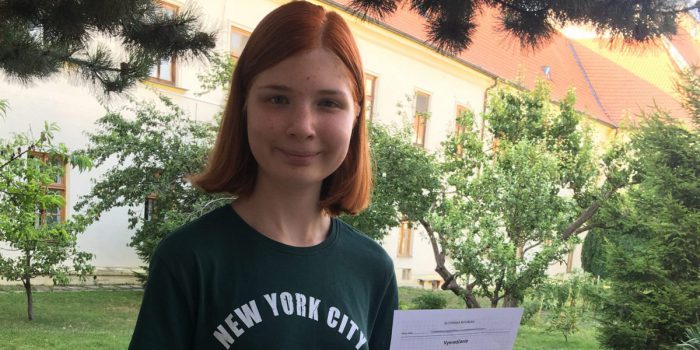 “My mother woke me up with the words that the war had begun and my native Kharkov was attacked. Honestly, at first, I thought it was a stupid joke”, Anna remembers vividly.

With only the essentials, she and her mum left their apartment to a safer place where they stayed for 10 days. At the start of March, they decided to take a train to Lviv because “every day it got worse”. “We didn’t have a plan; we were just saving our lives.”.

The train to Lviv took 28 hours, then another day by bus to get to the Polish border. “At the station, a volunteer approached us and offered to find an overnight stay. It turned out he had a friend in Bratislava, and he called him”, described Anna.

On the train to Bratislava there were many families fleeing the war. “Every person I met had their own heart-breaking story,” commented Anna. The next morning, she and her mum arrived in Bratislava and “were finally able to sleep with the thought that we did not need to run anywhere and save ourselves”.

Anna and her mother have been living in the Jesuit house in Trnava for seven months now. Anna’s mother works as an assistant in the kitchen, while she improves her Slovak to be able to find a job that matches her administrative experience. Meanwhile, Anna is attending high school and is working on learning Slovak, which “is similar to Ukrainian, so it’s not that difficult, also I like learning”. In her free time, she helps at the Family Help Centre of the house. “There are wonderful people here who have helped us a lot. I don’t even know how things would have turned out if the Jesuits hadn’t helped us. Now we have a house, food, and help”.

Tetiana, a dentist, is rebuilding her life in Poland 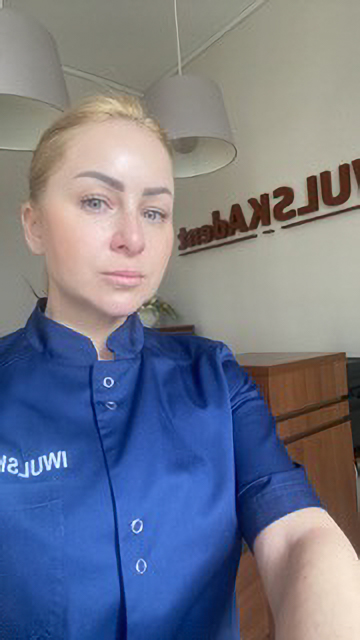 “On March 3, my daughter and I fled Kharkiv as it was extremely difficult to live in the basement. We got on an overcrowded train to Lviv. The train was really crammed with people; so many that you could hardly get to the bathroom.  But we didn’t care about how we had to travel. We only wanted to escape the shelling”, Tetiana recalls of the days fleeing.  Thankfully, she was received with open arms by her Polish neighbours.

Tetiana is now living with her sister, who also had to flee Kharkiv, and their children in Nowy Sącz. “In Poland, I have received lots of help from different organizations which I am grateful for from the bottom of my heart. It has given me a chance to stay on firm ground”, she highlights.

A little bit more settled now, Tetiana is starting to plan her next steps: the key is recovering her professional life as a dentist. “I have already received the proof for the recognition of my diploma here and now I am employed at one of the dental clinics. I have to work under supervision for three months though, but then I will be entitled to work independently and for that, I need to learn the language. Thanks to JRS I am now attending Polish courses”, she explains. 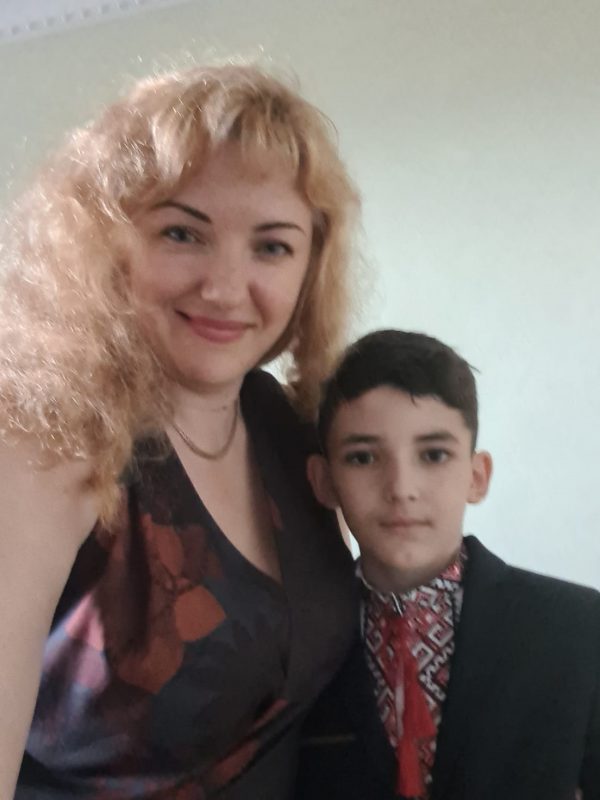 “I remember when my friend called me at 5 am on February 24th and informed me that the Kiev airport was under fire”, recalls Avankiats Olena. She immediately knew she had to flee: “I am originally from Donetsk and I knew it was the beginning of the war, so I tried to think calmly and decided not to waste any time because I knew that near Bucha there is an airport and an important strategic point for the enemy. We started to gather ourselves to leave the country and decided to go to Romania.”

However, the journey to get there would not be easy. “I had to drive for about 25 hours”, remembers Avankiats Olena, who drove her mother and children safety. At the border, she was pleasantly surprised by the helping open arms that received them.

Once inside Romania, Avankiats Olena received help from JRS Romania. As she describes, upon registering for activities “I felt released and supported. It gave me time to look for a good job and learn the language, as well as to take care of my children. It also helps me to pay for my flat and my mother’s medicine. Without this help, it would be very difficult to continue in Romania”.

Beyond the tangible help, Avankiats Olena also highlighted the warmth of the staff: “They try to lighten our days so that we can believe in tomorrow and they are very good at taking care of our children”.

While she does not know what the future has in store for her, Avankiats Olena wants to stay in Romania. “I don’t want to go back to Ukraine in the near future. I want to stay in Romania. It’s not the first country I’ve lived in, but it’s the first one where I feel rested and supported”, she concludes.

I hope we will soon go back, and we will have a peaceful sky over our heads.
Yevheniia 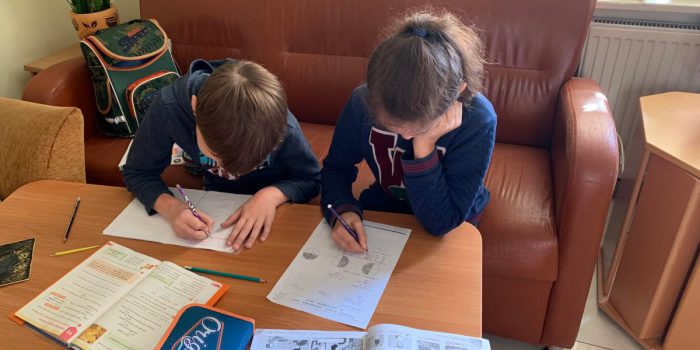 “In March 2022 my city was under the fire of Russian missiles, and we were forced to flee. I will never forget this terrible trip. It was not safe at all, accompanied by explosions of bombs, volleys of weapons, air alarms, and an inability to hide anywhere. In those moments I regretted leaving home. I felt like I had put my family in even greater danger”, she recalls of her journey.

In Lviv, Mykhailiuk Liudmila and her two boys found help and support in JRS Ukraine. “JRS extended a helping hand to us. They provided essential aid we so needed: safe shelter, food, ability to study and work. We felt like we were adopted into a friendly family. It’s so precious and vital to feel such support. ”Despite the current dire situation, Mykhailiuk Liudmila does not lose her hope of returning home someday.

“With time I haven’t lost my hope to return home one day,” she affirms. “If there is no chance to do it, I will do my best to build a new life in any possible safe place. I might stay in Ukraine while it’s possible. I don’t feel like I could manage to start a new life abroad by myself with kids. Although, I don’t stop thinking about my next steps. For now, I work with a sense of the importance of every day and with the understanding that right now and here I have a mission,” she adds. 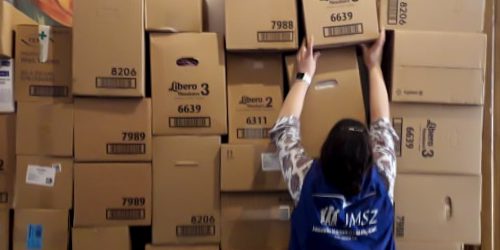 As the violence approached the city of Dnipro, Helena had one priority in her mind: “All I wanted was to save my son from the invasion”.

However, the decision to leave was not easy, and neither was the journey. “I felt absolute loss the day I fled. I clearly remember the traffic was terrible. There were kilometers and kilometers of cars with signs saying Kids”, Helena recalls. “When we finally arrived in Budapest, I felt relaxed and safe”, she confesses. In Budapest, JRS Hungary helped her settle and support herself and her son in the new city. “JRS helps me a lot on every step of my life in Hungary. Their support is 80% of my social protection and help in Budapest”.

Looking forward, Helena still is in doubt. “My future is very hazy. On the one hand, I miss my motherland, but, on the other, I have new life in Hungary. For the moment, I will definitely stay in Hungary. ”, she expresses. “If Budapest becomes my motherland in the future, then it will mostly be thanks to JRS.” 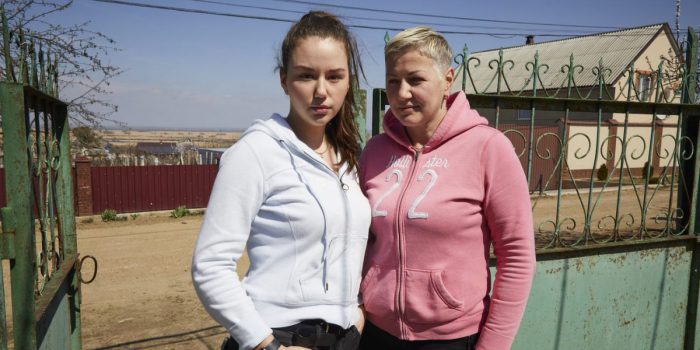 When Yevheniia and her mother decided to leave Odessa, the streets were full of families just like hers escaping the violence that the war was bringing to their homes. “We were 2 families in a 5-seat car. When there is no traffic, the trip to Moldova takes around 2 hours. That day, however, it took 27 hours for us to get to Moldova because the line was extremely slow”, Yevheniia recalls.

Since February 25th Yevheniia and her mother are in Moldova. They live with other three families in a house provided by CONCORDIA, who converted the place into a home after the war in Ukraine started. More than 8 months since leaving Odessa, Yevheniia longs for her hometown. She especially recalls with melancholy the Odessa National Academic Theater of Opera and Ballet and the Statue of the Duc de Richelieu.

While the present is bleak, Yevheniia maintains hope. “Russians are bombing Odessa little by little, but I hope that they will not destroy the architecture, we have so many monuments there… I hope we will soon go back to our Odessa, and we will have a peaceful sky over our heads.”

These stories were originally published by JRS Europe.

news
One Proposal: the coordinated Jesuit response to the Ukraine crisis 11 Jul 2022